Many deaf children find learning to read to be very challenging. This project evaluated a computerized speechreading (lipreading) training program in a randomized controlled trial to determine (a) whether it is possible to train speechreading in deaf children and (b) whether speechreading training results in improvements in phonological skills and, subsequently, single word reading skills.

Sixty-six deaf 5- to 7-year-olds children participated in the study. They became deaf before they were 12 months of age. They either took part in a speechreading intervention, or in a maths training intervention (active control group). The interventions consisted of computerised games that were designed to run across forty-eight 10-min sessions. Children were engaged in one session per day, 4 days a week, for 12 weeks. 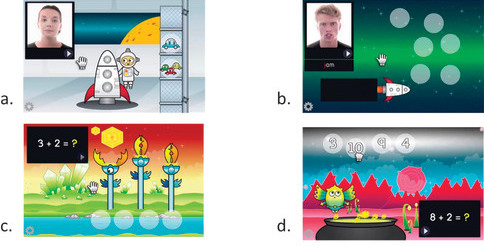 Screenshots from the computer games used in the speechreading (a, b) and maths (c, d) interventions.

In the speechreading intervention, children saw a silent video of a model saying a given word, and had to choose the corresponding picture from a choice of four pictures. They also had to match visual speech patterns with letters and words. For example, seeing the video of a model speaking a phoneme (e.g, ‘p’) and choosing the corresponding letter. In the maths training intervention, children were presented with counting and arithmetic exercises.

Results showed a significant benefit of the speechreading training intervention on speechreading and also on their speech production accuracy. Importantly the speech production measure took into account both auditory speech and visual speech (i.e., articulation accuracy). The benefits of speechreading training were stronger when only children who completed the full 48 sessions were included in the analyses. These benefits however did not filter through to result in improved single word reading.

Although no effects were seen on reading skills, practitioners and parents of deaf children are likely to be interested in a game that can lead to speechreading gains in deaf children. Future research should explore whether interventions are more efficient for children whose speechreading skills are particularly low and also whether a longer training period would lead to subsequent gains in reading.

See a demonstration of the games here: