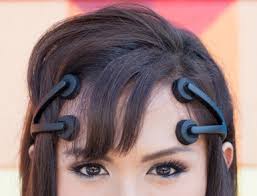 Ok, the title might be a little dramatic, but education is all about changing the brain, and it’s possible that new tools are available to help us do just that.

There is precedent for altering brain function via electrical stimulation. For example, electroconvulsive therapy is sometimes used to treat severe and intractable depression (this is sort of a brain ‘reboot’, with some temporary amnesia side effects). And deep brain stimulation via implanted electrodes is sometimes used to treat motor impairments in Parkinson’s disease.

During tES, two electrodes are placed on the participant: a positively charged electrode (anode) and a negatively charged electrode (cathode). One electrode is placed on the head over the area of brain that is of interest, while the other is placed somewhere on the other side of the body to complete the electrical circuit. In the case of tDCS a constant low current is passed between them; while during tRNS, an alternating current along with a random frequency and amplitude[i] is used. In both cases, the idea is to change the excitability of the underlying neurons. This change can be tailored by altering where the electrodes are placed, the length of the stimulation and the nature of the current, for example polarity, or frequency range in the case of tRNS.

tES has an effect on neural plasticity

Most people would agree that the exact mechanism(s) by which tES could work are not yet clear. Essentially, the hypothesis is that by changing how excitable neurons are, the brain can be made more or less responsive to whatever’s going on around it. The degree to which the brain can change its function in response to the environment is known as plasticity: how malleable it is. The implications for the classroom are clear: it would mean that children could learn the same material more quickly with brain stimulation. While this is an exciting prospect, there are also huge ethical problems with this idea. These are part of a wider picture including smart pills, and concern issues of safety, side effects, and who should receive the treatment. Ethics aside though, is there any evidence that these techniques could work?

There does seem to be some behavioural evidence for the efficacy of tES with children, mostly on mathematical ability. In one study, 12 nine-year-old children attending a school for individuals with specific learning difficulties were given tRNS for 20 minutes a day over nine days while playing a computerised maths game, which required them to map numbers on a number line[ii] . Over nine days the group as a whole got more accurate, but those who received tRNS improved significantly more than those who received a sham stimulation. (Sham stimulation gives a tingle, just enough to make participants think that something is happening, but no proper stimulation effect. It is included to control for ‘placebo’ effects, where people unconsciously try harder just because they think they are getting the treatment.) Moreover, the extent to which children’s accuracy increased correlated positively with change on a standardised maths test, suggesting that the new skills they were learning could also be generalised beyond the game.

In adults, the majority of studies conducted with tES have focused on learning new motor skills, and one recent study suggests that tDCS may also be of benefit for children[iii]. Over three consecutive days 24 children were trained to complete a task of manual dexterity (the Perdue Pegboard Test) with their non-dominant hand. For some children training was accompanied by twenty minutes of tDCS over the area of the brain responsible for motor control, while others received sham stimulation. Performance over three training sessions improved more rapidly and resulted in a higher final level of performance in those who received active stimulation. Importantly, again this benefit generalised to motor tasks other than the one that children were trained on; the improvements made also persisted to a follow-up test six weeks later.

However, not everyone agrees that tES is, or even could be, a beneficial endeavour. In 2016 respected neuroscientist György Buzsáki presented some unpublished work at the annual meeting of the Cognitive Neuroscience Society[iv]. Buzsáki implanted 200 electrodes under the skull of a human cadaver and recorded the electrical current induced by 1-2 milliamps of tES (in this case transcranial alternating current stimulation). He found that approximately 90% of the electrical charge was redirected by the scalp such that the implanted electrodes barely picked up a signal. While Buzsáki stated that such a current would not be able to stimulate neuronal activity, others have pointed out that tES has never set out to actually induce firing, but rather to change the likelihood that neurons will fire in response to things in the world.

In 2015 a group in Australia published a combined analysis of all the research looking at the effects of a single session of tDCS on any aspect of cognition in healthy adults[v]. Even though individual papers have found quite strong effects, the team showed that when putting them all together, no significant reliable effects emerged: the papers that showed effects were essentially cancelled out by those that didn’t[vi]. The same team considered whether tDCS has an effect on the physiology of the brain by looking at articles that together used 30 different measures of physical change in the brain[vii]. They found only one measure that seemed to be sensitive to tDCS, which was how easy it is to trigger an electrical response in the motor system. Intriguingly, when the team looked across papers published between 2000 and 2014, the size of the reported effects was found to significantly decrease with passing years, not something that’s easy to explain. Notably though, these analyses only included studies that used a single session of stimulation, where arguably multiple sessions over days or weeks would be more likely to show an effect if it’s there.

Brain stimulation is not one size fits all

There are plenty of interesting and potentially important studies on transcranial brain stimulation, but as we’ve seen, the overall picture is muddy. Even in the case of motor skill learning, where much of the adult literature on tDCS focuses, not all studies find significant results and, crucially, even within studies not all individuals respond to stimulation to the same extent[viii].

Without knowing exactly what stimulation does to neural activity, it may be difficult to get important things right, things like how much of what stimulation should be applied, and exactly where on the head. The other crucial part of the story is who gets the stimulation, and when they get it. The effects of stimulation like tDCS vary depending on both characteristic traits of the individual receiving stimulation, and also on their current state at the time of stimulation[ix]. This is demonstrated nicely by the finding that adults with maths anxiety are better at performing calculations during tDCS, while those without maths anxiety are impaired by tDCS[x]. So, what’s beneficial for some may be actively detrimental for others.

Could brain stimulation be dangerous?

Transcranial brain stimulation is not dangerous in terms of electrical shocks, since Buzsáki (rather grimly) showed that barely any current reaches the brain. However, we have to acknowledge that if stimulation can have an effect on the brain, then without a comprehensive understanding of it, we could have a dangerous tool on our hands.

One reason stimulation could be dangerous is that brain regions typically do more than one thing. To give one example, the dorsolateral prefrontal cortex is an area of the brain approximately underlying each side of the hairline. It is involved in high level planning and reasoning, and is often targeted in tES research (including the study on number line understanding in children). However, stimulation of this area has also been found to alter the likelihood of making high-risk, high-gain decisions[xi]. This means that a study targeting one sort of behaviour, for example maths ability, could inadvertently alter children’s behaviour in other, unexpected ways. Another crucial consideration is the long-term effects of brain stimulation, especially in young children. This has not yet been addressed by the research.

It seems pretty likely that transcranial brain stimulation can and does have an effect on cognition and behaviour. However, there are just too many unknowns here to make predictions about classroom practice so, on balance, for the moment the verdict is neuro-miss. It may be more pertinent to talk about clinical practice, though. On the whole, brain stimulation seems to have more of an impact for children and adults who are experiencing some sort of specific difficulty, and it’s perhaps easier to justify balancing the potential benefits and side effects in the clinic than the classroom. What is clear is that brain stimulation isn’t going away as it continues to capture the imaginations of researchers, clinicians and educators around the world.

For a highly insightful and entertaining first-hand account of tES, see this New Yorker article.

[vi] The meta-analysis included published work searched for in June, 2014, with a total of 92 individual studies contributing data, some of which included more than one task. Only those studies that included a sham control group were included in the analysis.