Stories are powerful tools for learning for a number of reasons. People enjoy stories and stories can help to motivate learners when learning. Stories create more vivid, powerful and memorable images in a listener’s mind which helps both learning and recall. In addition, stories embed concepts within a context; this can make abstract concepts more accessible and helps show how concepts can be applied in real life. So according to recent research, narratives can be a powerful tool to teach mathematics.

Narratives as an anchor for mathematical development

Learning is not just some abstract thing that happens in the brain; rather, learning happens in the context in which a concept is used. Narratives can represent mathematical concepts through their prose, illustrations, logical development and context. An example of how narratives can be used to teach young children comes from a study by Kinnear and Clarke[1]. Earlier studies which examined probabilistic reasoning (calculating the likelihood that something will happen) in 6- and 7-year-old children had found that although children were able to use data to draw inferences,  when they explained their answers, they would use subjective examples from their own experiences and show little understanding of how they achieved their answer. Kinnear and Clarke used a story picture book including the character Litterbug who was first very wasteful but then learned about recycling and started to collect litter everywhere in the town. In their study, 5-year-olds were presented with the book Litterbug and a table with information about the rubbish that Litterbug had collected on Monday, Tuesday and Wednesday per type of items (e.g. 5 cans, two apple cores, three papers, etc). Children were then asked to predict how much of each litter category Litterbug would collect on Thursday. In contrast to previous studies which showed just data tables, children who were presented with the Litterbug story drew exclusively from contextualised knowledge of the picture story book to explain their predicted values when asked. This shows that children have the capacity and ability to draw meaningfully from data and use context knowledge to explain data observations if the connection to the data context source is indeed meaningful.

For example, a recent study by Carrazza and Levine[2] at the University of Chicago compared typical maths books that simply include sets of objects and books with the same objects and sets incorporated into stories (rich narratives) for numbers 1 to 10. They asked two groups of parents, one for the classic number books and one for the rich number stories, to use the books each day with their three-year olds. The researchers examined how well children could count and understand cardinality before they started using the books as well as after 4 days of using the books. Even though parents in both groups reported the same number of book reading sessions during the four days, children in the rich narrative condition performed better on the cardinality and counting task than those who used the simple pictures of the same sets of objects. This shows that embedding knowledge into rich narratives aids children in learning mathematics faster.

Storybooks as a way to develop mathematical vocabulary

Not only can the context help to embed knowledge and understanding, storybooks are also extremely useful in teaching children mathematical vocabulary. The development of mathematical vocabulary is important for young children as its use is necessary for them to reason and to understand maths. For example, when children learn that the words “more” and “less” can be used to describe number, they have a way to verbally explain the differences between a basket with ten apples and a basket with 5 apples. The use of storybooks that highlight mathematics vocabulary and explain numbers and how they relate to each other might help children “mathematize” or understand everyday situations in mathematical terms.

We can see then that while the richness of narratives allows young children to learn concepts faster and foster a deeper understanding of mathematical vocabulary, there is evidence that even just reading books, whether they have a mathematical content or not, influences children’s mathematical abilities.

Reading from left to right helps to understand the number line

People have been argued to have an internal number line that goes from left to right in most western countries and it is thought that the direction of this number line is influenced by the reading direction in those countries. A recent study showed that when reading The Very Hungry Caterpillar, a children’s book in which the caterpillar comes out of an egg, looks for food, and eats one apple, two pears, three plums, four strawberries, and five oranges, children who read the book with the pictures presented from right to left and page turning from left to right (so opposite of usual books) changed their counting direction from right to left when counting a row of coins. Therefore, the orientation of the pages and pictures in shared book reading activities can activate and change the child’s spatial representation of numbers along a number line (see Göbel and colleagues, 2018)[3].

It has been shown that children who have a firm mental number line are more able to manipulate numbers and as a result have better mathematical abilities. Number lines and narratives share the fact that both have a structure or sequence to them. Therefore, using words such as ‘before’, ‘after’, ‘in front’,’ ‘next’, ‘forward’ and ‘backward’ in stories will help understanding of sequences and of number lines. In addition, books are like number lines in that a book goes from page 1 to the final page just like a number line goes from the start to the finish. As pages are flipped, pages with smaller numbers are placed on the left and pages with larger numbers remain on the right. Therefore, as children get more familiar with books they get a stronger understanding of the relationship between space and numbers.

A study by Daniela O’Neill and colleagues (2004)[4] examined the narratives of 3-year-old children who were asked to tell a story from a wordless picture book. The researchers analysed various aspects of the children’s narratives, including how many conjunctions children used, i.e. sentences that include words such as ‘and’, ‘but’, ‘or’, ‘because’, ‘after’, along with the event content of the stories, i.e. how many different parts the story contained (which shows the richness of the content of the story). The number of conjunctions and events used when children were three years old correlated to their mathematical performance at that age, as well as predicted their mathematical performance two years later. This suggests that there is a relationship between exposure to books, narratives, and number line development and improved number line abilities allow for improved mathematical abilities.

In reality, all books and stories contain some kind of mathematical content, as mathematics is truly embedded within our culture (telling the time, reading the number of a bus/train to catch, postcodes, telephone numbers, cooking etc.). Therefore, it is less about the kind of story or book but rather how they can be used to highlight mathematical concepts. 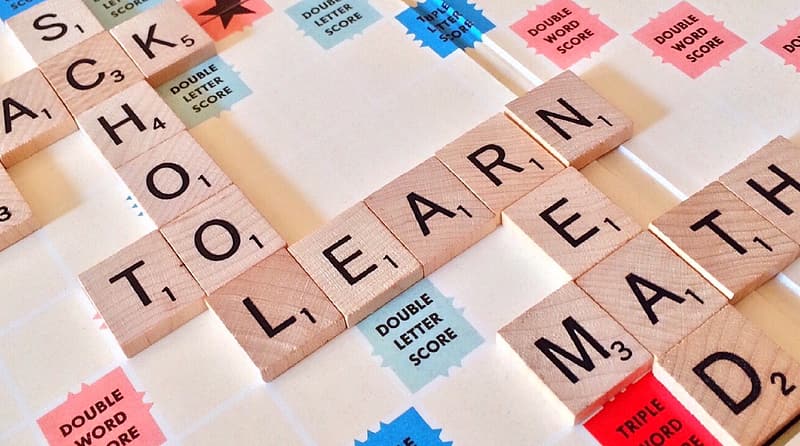 The best way to teach children mathematical concepts is to first read the story while pointing out pictures and highlighting mathematical concepts and vocabulary words such as ‘same’, ‘different’, ‘bigger’, ‘smaller’, ‘half’, ‘whole’, ‘next’, ‘after’, ‘before’. We often assume that children will implicitly absorb the information we tell or teach them. Although this is true to some extent, it is better to talk to children about the vocabulary words and define them within the context of the story. For example, when reading the story ‘Two of Everything’, a child might not be familiar with the word ‘double’ and thus it may be necessary to explain this explicitly. In order to check that your child has understood the mathematical concept in the story, you could ask your child some other examples of this mathematical concept from the book or even from outside of the book. For example, when reading Goldilocks you can ask, “There were three bowls in the book. Were there any other groups of three in the book?”. 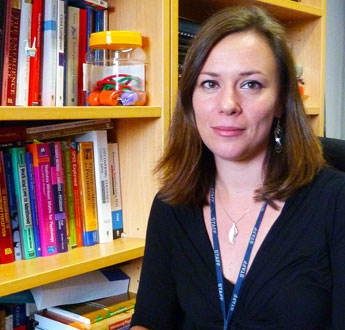 Dr Jo Van Herwegen, PhD, is an Associate Professor in the Department of Psychology and Human Development at UCL Institute of Education, London and co-ordinator of the Child Development and Learning Difficulties Lab. Her research focuses mainly on language and number development in both typical and atypical populations, including Williams syndrome, Autism Spectrum Disorders, Down syndrome, and Mathematical Learning Difficulties. She explores individual differences and what cognitive abilities or strategies relate to successful performance, in order to aid the development of valid training programmes. Her research has been supported by various sources of research funding (e.g., British Academy, Nuffield Foundation, Baily Thomas Charitable Fund etc.).