Autism is a neurodevelopmental condition predominantly diagnosed on the basis of differences in social communication and interaction and repetitive and restricted behaviours. Autistic people may experience sensory information differently from non-autistic people. Autism often co-occurs with other diagnoses, especially anxiety.

Autism is one of the most commonly diagnosed neurodevelopmental conditions. In the UK, it is estimated that at least 1-2% of children are diagnosed with autism, with 3-5 more times as many boys diagnosed than girls1,2,3. However, this difference in diagnosis between boys and girls is thought to be due to a number of factors, such as autistic girls being more adept at ‘masking’ their traits, rather than a true reflection of differences in prevalence.

Like many characteristics that emerge through development, autistic traits are likely caused by a complex interaction between genetic and environmental factors. Various studies point towards autism being related to various genes. For example, autism is more common in children who have genetic disorders such as Fragile X Syndrome and Down Syndrome, suggesting that genetic factors contribute to autism. Studies of siblings also point towards genetic factors in autism. For example, 5-8% of autistic people’s siblings also have autism, rising to 82-92% if the siblings are monozygotic twins – identical twins that share the same genes4. It is important to note that autistic individuals have raised ethical concerns around research which seeks to identify biomarkers for autism, in terms of what the aim of such research is, and the extent to which it actually benefits autistic people. What is clear, however, is that it is currently not well understood how genes and environment interact in the development of autism.

Photo by Peter Burdon on Unsplash

Autism is often described as a spectrum condition which means that there is no one set of autistic-specific traits shared by all autistic people. Rather, autistic people can have different profiles of strengths and challenges across a range of characteristics. How much these traits impact autistic people’s lives can also vary considerably. Many individuals diagnosed with autism are not held back in achieving their goals so that autism can be viewed as a difference, but for some children, their experience is of challenges in their development, friendships, and school lives, and in that sense, features of autism are sometimes described as difficulties. A better general understanding of autism can help with communication, which always relies on two people. The following paragraphs are to be understood within this context of diversity.

Autistic people may also experience over- (hyper-) and under- (hypo-) sensitivity to different senses such as sound, light, smell, temperature and pain. For example, an autistic person who is sensitive to sound might experience background noises in a classroom as intensely loud and anxiety-inducing. Someone who may be hypo-sensitive to pain may not notice if they have cut or hurt themselves. The same person who might be hypo-sensitive to certain types of pain, might find different types of experiences painful, that other people would not.

Whilst anxiety is itself not a core feature of autism, many autistic people can suffer from anxiety. It is estimated that anxiety affects 40% of autistic individuals and is a common problem for autistic children5,6. Most people would find managing sensory differences in unaccommodating environments, navigating uncertain situations, and difficulties in understanding social situations stressful.

There are a number of neuromyths related to autism which we discuss in the rest of this blog:

A common misconception is that autistic people do not feel empathy towards other people. This misconception is related to the finding that autistic people may have difficulties picking up on the subtle cues that convey how someone is feeling in some contexts. For example, cross-cultural studies have reported that some autistic people are better at recognising others’ emotions that can be generalised to a broad range of contexts (e.g., happy, sad, afraid, angry, disgusted, surprised), compared to complex emotions that are bound to more specific contexts (e.g., interested, bored, excited, worried, disappointed, frustrated, proud, ashamed, kind, unfriendly, joking, hurt)7. Likewise, an autistic person may understand how another person feels in a given context, but they may communicate this understanding differently. For example, it has been argued that autistic people actually are over-aroused by other people’s emotions and become too overwhelmed to respond to these and shut down8. Something to bear in mind is that no one empathises with everyone all of the time. Some autistic people may need additional support in understanding others’ feelings in certain contexts, or they may need more support in communicating how they think others feel, although neither should be confused with the inability to understand other’s feelings.

“Many times, autistics revert to isolation by default rather than preference. It is infinitely easier to back away and not try to be included instead of oafishly stepping in and attempting to convey your intent to be a part. Loneliness is the most predominant side effect of our unique design”

“Learning to make connections with people–much as I desperately wanted to–was a bewildering process, for they kept changing, and I felt like an alien, always about to be exposed” 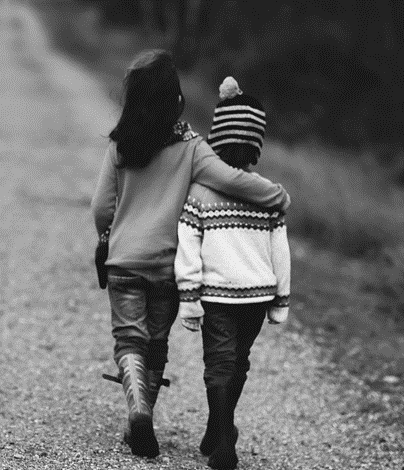 Photo by Annie Spratt on Unsplash

Neuromyth 3: Autistic children do not like to be touched

Different sensory experiences are a key feature in autistic people and many autistic people have sensitive sensory experiences, especially related to touch10. Because some autistic people may have difficulty in quickly interpreting the social dynamics of a situation, they may also not see a particular instance of affection or touch as socially relevant. Indeed, a Swedish study has shown that hyper-responsiveness to touch predicts social difficulties in autistic adults11. However, different autistic people have different sensory profiles, with some individuals showing hyper-sensitivity to touch (i.e., may overreact to a touch stimuli due to hypersensitivity) and some showing hypo-sensitivity to touch (i.e. need more input to respond)12. Indeed, interviews with parents of autistic individuals showed large individual differences, with some autistic individuals liking to touch everything and others responding negatively to touch13. However, sensitivity profiles in autism are currently not well understood, and further research in this domain is required14.

Neuromyth 4: Autism only occurs in boys

While 3-5 times as many boys are diagnosed with autism than girls, this difference may not be a true indicator of actual prevalence1,2,3. Because many autistic traits relate to social behaviour, and boys and girls have different social experiences, autistic boys and girls may develop different coping mechanisms. For example, autistic girls may be quieter than boys, or they may be more adept at ‘masking’ their traits due to societal pressures, both of which can make autistic girls’ traits less visible than autistic boys. In addition, there are high levels of non-traditional gender identities in autistic people.