One or two of every 1,000 children born in the UK have permanent sensorineural hearing loss (caused by abnormalities of the cochlea or of the auditory nerve), while microtia (where the external ear does not develop properly, thereby causing a form of conductive hearing loss, i.e., a problem transferring sound waves) occurs in one out of approximately 8,000-10,000 births. Furthermore, sensorineural hearing loss can have its onset in the school years, and temporary but recurring conductive hearing loss due to ear infections is very common in school-aged children. 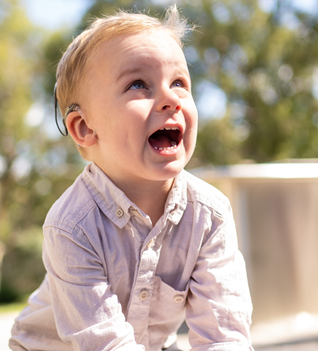 Photo by Zoe Graham on Unsplash

One might wonder why – when language deprivation is unheard of in hearing children except for in cases of severe abuse and neglect (e.g., the tragic and well-known case of Genie1) – it is experienced by so many DHH children, even those whose deafness is labelled ‘mild’ or ‘moderate’.  The vast majority – approximately 95% – of DHH children are born to hearing parents who have no experience of deafness and who know no sign language, and who therefore cannot communicate (at least, not initially) with their DHH child using a language in the visual modality. In many countries, including the UK, the advent of universal newborn hearing screening has enabled the much earlier identification of deafness, allowing for earlier language and communication support for DHH children and their families, but most often the advice to parents is that their child must learn just spoken language and must receive cochlear implants or hearing aids. Although both types of technologies have improved greatly over the past decades (and others, such as auditory brain stem implants, are undergoing rapid development) they do not restore completely normal hearing and so are not a ‘cure’ for deafness. While some DHH children will benefit from assistive hearing technologies such as cochlear implants, not all will. There remains great variability and unpredictability in DHH children’s language-learning outcomes, and in their subsequent academic attainment.

In this blog we consider three neuromyths (i.e., misunderstandings of cognitive neuroscience) that contribute to maintaining language deprivation and therefore to maintaining lower educational outcomes for DHH children and young people. These are:

All three of these statements are incorrect, and in this blog we consider why that is so.

Neuromyth 1. ‘Using a cochlear implant allows children to regain normal hearing and to learn to speak so well that they will achieve typical language development age-appropriate language skills.’

While many forms of poor vision can be corrected to normal by glasses or contact lenses, the same degree of correction is not possible for deafness. Cochlear implants bypass the normal acoustic hearing process to replace it with electric signals which directly stimulate the auditory nerve. A child with a cochlear implant will need to receive intensive auditory training in order to learn to interpret these signals as sound and speech.  And what they hear will never sound the same was what a person with normal hearing will hear. (This video shows how cochlear implants work, and this video shows just how degraded speech and music sound via an implant). Hearing and speech perception/production skills show a wide range of variation across implanted individuals. Although factors such as the duration and cause of hearing loss, how the implant is situated in the cochlea, and the overall health of the auditory nerve are relevant to outcomes, much of the variance in hearing and speech outcomes remains unexplained. Similarly, although some implanted children will achieve spoken language skills (e.g., grammar, vocabulary) in the typical range, many will not2,3. And even when children are able to acquire a spoken language via cochlear implants, the listening effort demanded is considerable, resulting in significant concentration fatigue which further exacerbates academic challenges4.

For an educational professional or a parent, it might seem that if a child is wearing a device such as a cochlear implant their hearing has been corrected to normal, but it has not. 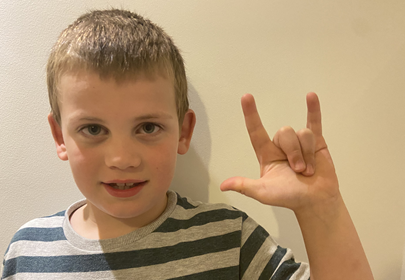 Neuromyth 2. ‘Cochlear-implanted children should not be exposed to a sign language, because this will impede their ability to learn spoken language.’

This neuromyth appears to be related to the visual takeover hypothesis (as discussed in 5). In DHH children the brain regions that had previously been thought be primarily responsible for auditory processing are now known to be relatively plastic, and they can be recruited during sign language processing6. Such studies have been used as the basis for arguing that learning a sign language might accelerate maladaptive cortical reorganization, and that cochlear implantation will be less successful when there is ‘visual takeover’ of typical auditory-related neural pathways7,8,9. However, there is no causal evidence for any negative impact of sign language exposure on spoken language outcomes. On the contrary, implanted children born into deaf families and who learn sign language from the start perform well on spoken language assessments10. Sign language knowledge also scaffolds DHH children in learning to read the written form of a spoken language11. Overall, the available evidence favours the hypothesis that lack of access to highly structured linguistic input (i.e., language), rather than simply lack of access to sound, is a more significant contributor to poor cochlear implant outcomes12.

Educational professionals and parents should not worry that, when a DHH child learns a sign language, this visual language will interfere with spoken language development in language-associated brain regions. Any such concerns are not warranted by the current evidence.

While it is certainly the case that cochlear implantation is more successful the younger it is carried out8 the sensitive period for language acquisition is most likely to be independent of modality, i.e., relevant to both spoken and sign language13. In any case, speed is of the essence – why wait to provide an accessible (sign) language when delaying language input will have knock-on effects for important and academically-relevant aspects of cognition such as executive functions14? As discussed with respect to Neuromyth 2, above, Neuromyth 3 might be fuelled by a misunderstanding of the visual takeover hypothesis, when in fact children are able to learn both a spoken and a sign language from birth with no adverse consequences. Neuromyth 3 might also be fuelled by a misconception that sign languages are easier to learn than spoken languages – maybe because many people consider them to be less complex and less rich than spoken languages (which is not true!) – and that their acquisition is therefore not impacted significantly if a child is not exposed to them until later.

Educational professionals and parents should be aware that early exposure to an accessible language is essential for language development. Cochlear implantation is likely to be more successful the younger a child is, but early implantation should not rule out the child learning a sign language in addition to a spoken language.

Universal Newborn Hearing Screening and improvements in assistive hearing technologies mean that DHH children’s opportunities for developing good spoken language skills have improved in recent years. However, there is no guarantee that a DHH child will be able to gain sufficiently good hearing levels to attain age-appropriate spoken language skills: many do not.

A false opposition has been set up between spoken and sign languages, with many parents not being given the option to choose both a spoken and a sign language for their DHH child. Decades of research have shown that sign languages are just as complex, real, and language-like as spoken languages15. They are even processed using the same areas of the brain16. In fact, the brain does not actually care whether it’s confronted with spoken language or signed language – it just recognises ‘language’, processes it and learns it. In the words of Hall et al. (2019: 367) ‘Deaf children need language, not (just) speech’. Hall et al. (2019: 369) advocate for ‘a child’s mastery of at least one language’ (what they term ‘global language proficiency’) to be ‘prioritized over the child’s mastery of any specific language with the caveat that for many DHH children, this is likely best achieved by providing access to a natural sign language’. From an educational neuroscience perspective, the current evidence base backs up this advice.

Deaf Awareness course for teachers: https://www.ucl.ac.uk/short-courses/search-courses/deaf-awareness-online-training-teachers. This free online course for teachers will help you communicate more effectively with, and support the learning of, your DHH pupils. It covers the importance of deaf awareness in the classroom setting; different perspectives of deafness; strategies for communicating with DHH pupils. It also includes a free and optional British Sign Language ‘taster’.

National Deaf Children’s Society: https://www.ndcs.org.uk/about-us/ is the leading charity for DHH children and young people, their families and the professionals who support them.